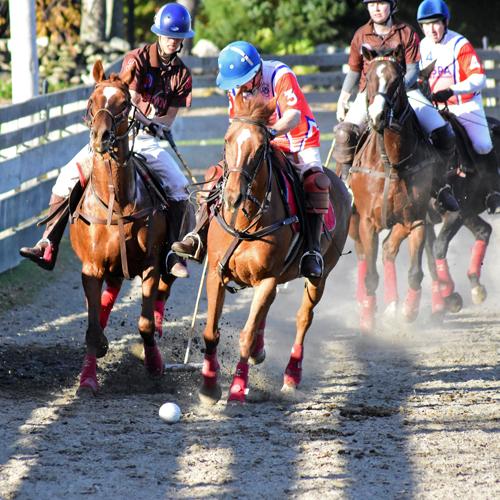 Round One: Andy Janik, Matt Janik, Caroline Rex, and Lars Whalberg (Navy) challenged Carol Hottenrott, Bob Barton, and Mike Mangili (Green).  Navy started strong in the opening chukker, taking an early two goal lead before Green got in the game with a goal; but a costly penalty ended the first chukker 3-1 in favor of Navy. The trend continued in chukker two with Navy adding three more goals, but then a foul by one of its players led to a fifteen yard penalty conversion by Green.  Down by four goals, Green rallied in the third chukker, scoring a two point penalty conversion on a center hit.  Navy added another three goals for a 9-4 lead. Navy’s scoring prowess continued through the fourth, ending the match in a 12-5 victory.

Round Two: Riley Davis, Signe Caksa, and Hans Chin (Brown), faced Peter Jenkins, Eric Schnider, and Brian McCormick (Red). Brown dominated the opening chukker, with a steady stream of unanswered goals for a 7-0 lead. Red evened the playing field in the second chukker, matching Brown goal for goal. Red was back on the defensive through the third chukker, while Brown widened its lead, 13-2.  Not counted out yet, Red doubled its score in the final chukker, but three additional goals by Brown outpaced Red's advance for a 16-4 win.

Consolation Round: The second place teams, Red and Green opened Day 2 of the tournament with a vigor. Green won the first throw, drawing a goal to open, then making a 25 yard defended penalty conversion for a second goal. A fifteen yard penalty in favor of Red got the team on the board, but Green solidified its lead, 3-1. Red turned the tables in the second chukker, scoring four goals to take a 5-3 lead, and then widened the margin, 7-4 in the third. Two fifteen yard penalties helped Green regain its footing, but three more goals by Red earned the victory, 10-6.

Final: Vying for top tournament glory, Brown and Navy closed out the weekend in the Final. Navy was first to the ball at the throw-in, but some quick goals, and two costly penalties put Brown at a 4-2 advantage. Navy lost its early momentum through the second and third chukkers, gaining only one goal to Brown’s seven. In the final chukker, Navy came into its own, restraining the Brown advance, while adding four goals, including a two point penalty from the 50 yard line. One more chukker and they may have had it, but Brown took the win at the final bell, 13-7.

Prizes were distributed, amidst great camaraderie and sportsmanship, on the milestone for these up and coming new players.

“Moving from lessons to competition challenges new players to think, not only about their own performance, but also to track the fast changing game and how to work with their teammates and mounts to gain the advantage,” explains head instructor, Dan Keating. “

Discover Polo! Watch it, Play it, Support it! The change in seasons launches Newport Polo’s arena polo league, lessons, Intro Clinics, competition chukkers and tournaments for players at all levels to get in the game. High school teammates face-off with regional rivals, and Brown U returns for intercollegiate competition. Newport Polo offers weekly polo lessons with open enrollment for new players. Click Here for the brochure.