Newport Polo is pleased to announce the World Premiere of Sacred Ground, a feature-length independent film documenting the 25th Season of the Newport International Polo Series, for a one-night engagement to see the work in its entirety on the big screen, on Saturday, Feb. 25th at Jane Pickens Theater and Event Center, 49 Touro Street on Washington Square in Newport, RI.

A cocktail party is scheduled at 7pm to meet & greet the filmmakers and players, followed by the film at 8pm, concluding with a Q&A with the filmmakers. Seating is limited; tickets are $12, and can be purchased in advance from www.janepickens.com (and at the door, if available); proceeds will benefit Friends of the Jane Pickens Theater. For an invitation & details to the After Party, please sign up. 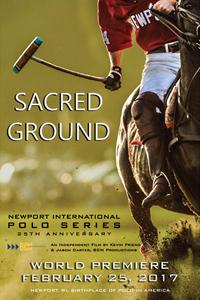 This screening is a rare opportunity for the Newport audience to see the film in its entirety on the big screen, prior to a succession of prime-time regional network television mini-series broadcasts, Film Festival premières, syndicated airings & presentations this year. The broadcasts, sponsored by Discover Newport and Helly Hansen, among others, will air in 2-part series for 4-week spans. For more information, contact BCN Productions.

Sacred Ground is being presented in conjunction with the Newport Winter Festival, which will also feature Beach Polo earlier that day, at 1pm on Feb. 25 & 26, hosted by Newport Polo.

“Documentarians Kevin Friend and Jason Carter approached us to tell our story," explains Dan Keating, Captain, "and followed us through the travails, challenges and triumphs of the 25th season with the passion, expertise and comprehensiveness of their highly acclaimed body of work."

BCN Productions’ Kevin Friend directed and co-produced the documentary with award winning cinematographer Jason Carter, capturing footage from June through September during the Polo Series' 25th anniversary season. Through location filming at the International Polo Grounds in Portsmouth, aerial footage, and scenes and events on location in Newport, RI, the 90:00 minute original epic narrative compiles inside-the-chukker experiences, candid player and fan interviews, back story of the club, behind the scenes preparations, and reveals from daybreak rituals to the glittery gala, into a cinematic celebration of the spirit of Newport Polo, one of the most renown polo experiences in the world today.  Watch the official movie trailer.

About Newport International Polo Series: Newport Polo hosts the Newport International Polo Series, featuring teams from around the world, for the past 25 years and is the only forum in the world dedicated to international polo competition. To date, 33 nations have participated. The unique summertime tradition attracts audiences from throughout the New England region. Public exhibition matches are held every Saturday, June through September. The most current information is online at www.nptpolo.com and by private Subscription to its monthly E-magazine.