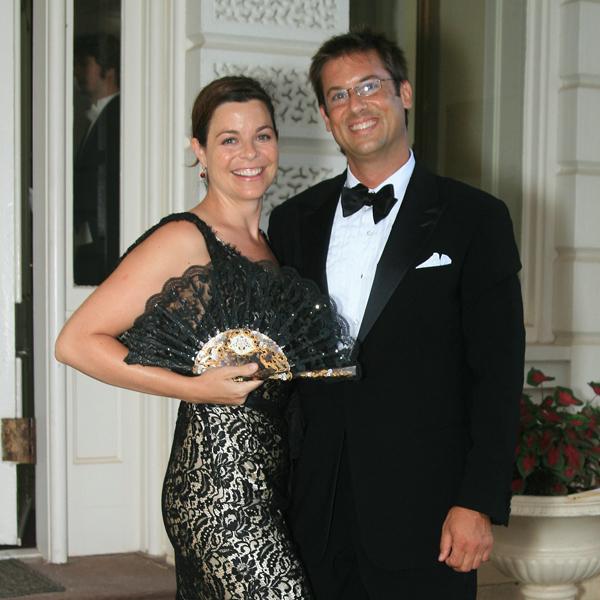 A ‘flamenco’ theme welcomed this year’s guests of honor, the Spanish Polo Team, who took impromptu turns on the dance floor with a flamenco performer in between bites of filet mignon, as 170 guests applauded the showmanship.

The seventh annual black-tie charity gala began with a pre-party at the newly opened Polo Lounge at the Vanderbilt Hotel in Newport, for cocktails and gourmet hors d'oeuvres, including fresh sushi, lobster puffs and their signature Dark & Stormy ice cream sandwiches and cosmo-polos.

The party moved on to commence the gala at the Astors' Beechwood with a cocktail hour on the back portico and lawn overlooking the Atlantic Ocean and Easton’s Beach at sunset. A martini bar, courtesy of Grey Goose Vodka, poured specialty concoctions for the occasion. A gourmet dinner by Russell Morin and dancing to a 5-piece band followed in the Astor’s magnificent ballroom. A live and silent auction with fabulous items raised thousands of dollars for the Newport Polo Education Foundation, including round-trip Caribbean tickets from Continental Airlines, a designer exotic skin handbag by Marcela Calvet from her Los Robles Polo Time collection, an interior design consultation for home, office or yacht by Tocar Design of NYNY, 3-day resort accommodations at the Vanderbilt Hotel in Newport, a case of rare premium wine, an official #3 captain's jersey from the Newport International Polo Series, a Chanel gift basket of the latest skin care and fragrance products, and a 3-day instructional polo clinic by world-renown Rege Ludwig in Palm Springs, to name but a few of the rare items offered.

The Spanish Polo team, great-grandsons of the founding father of polo in Spain, attended with their entourage from Madrid, Seville, and Jerez. 2007 Gala Co-chairs from the Newport Polo Club were Dave and JR Bullis.

The sold-out event benefited the Newport Polo Education Foundation (NPEF), a non-profit 501[3]c organization registered in Rhode Island with a mission to support charitable causes as well as training and educational programs surrounding the sport of polo. NPEF spokesman George Day adds, “We are dedicated to the endurance of this culturally-significant sport here in Newport, its American birthplace, and we are grateful to the community for supporting Newport’s grand polo tradition. In turn, we wish to give back to the community by supporting charitable causes.”

The popular summer soirée, hosted by the Newport Polo Education Foundation, attracted Newport patrons, polo players and enthusiasts and visitors to the City by the Sea from all over the world for a weekend of fun in the glamorous seaside resort, beginning with the Ball and continuing the next day with a tribute match in the Newport International Polo Series and a field-side New England lobsterbake.

The site of this year’s International Polo Ball is Astor’s Beechwood mansion, built in 1851 by architects Andrew Jackson Downing and Calvert Vaux for a New York merchant. Caroline and William Backhouse Astor, Jr. bought the home in 1881, and hired architect Richard Morris Hunt to oversee a $2 million renovation to make it the social center for New York society for the next twenty-five years of the Gilded Age. Astor was the grandson of John Jacob Astor, the German immigrant who made himself the richest man in America by investing in fur trading and real estate. Caroline brought long lines of established social background to the Astor fortune and became the undisputed queen of American society, presiding over countless social activities during the eight weeks each year she visited Beechwood. The highlight of every summer season was Mrs. Astor's Summer Ball.