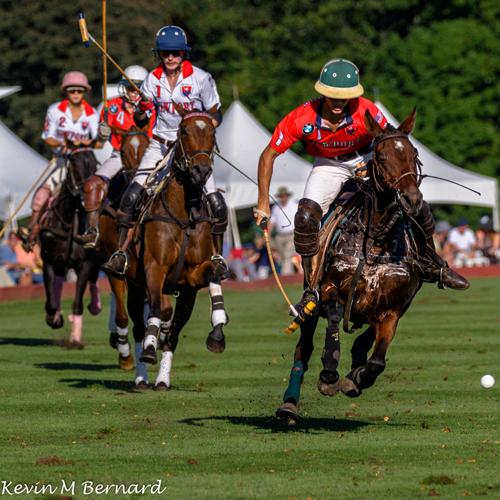 New England’s top players mounted up for a high-octane Pro-Am, taking no prisoners in one of the last matches in the NBC-10 Newport International Polo Series XXVI, presented by BMW.

Representing Portsmouth in white was Charlie Bullis in the #1 position, with Dan Keating at #2, Carlos Maldonado at #3, and Amy Rice at #4.

Wearing red for Newport in the #1 position was Sam Clemens, with Minnie Keating at #2, Dave Bullis at #3, and Rory Torrey at #4.

Newport led the charge to open the match with quick goals by C. Bullis and Maldonado for an early 2-0 lead.  Portsmouth tied the match in the second chukker thanks to two goals by Torrey, but Maldonado split the posts just before the final bell to maintain Newport’s lead, 3-2.  The teams kept a tight spread through the third chukker, with no clear advantage to either side.  Maldonado managed a single goal for Newport and a 4-2 lead at the end of the first half.

Maldonado made a strong start for Newport in the second half, opening the 4th chukker with another goal.  C. Bullis followed with a neat penalty conversion, increasing Newport’s lead 6-2.  D. Bullis returned fire for Portsmouth to keep the team within 3 points of the leader by the end of the chukker.  Neither side willing to give up any ground, the fifth chukker was closely defended with one hard-fought goal by C. Bullis advancing Newport 7-3.  With only four goals in it, Portsmouth was still within shouting distance of the win as the final chukker commenced.  C. Bullis padded Newport’s lead with another goal, but Clemens matched the play for Portsmouth. A decisive response by Rice and C. Bullis put the final nail in the coffin as Newport reached double digits.  Seconds remaining, D. Bullis scored a final goal for Portsmouth, ending the match in the 10-5 Newport victory.

Following the match, the teams took to the podium for the Veuve Clicquot Champagne Toast and Trophy Presentation, where Janelle Driscoll, Associate Publisher of Where Boston presented the victorious Newport with the Vanderbilt Cup.