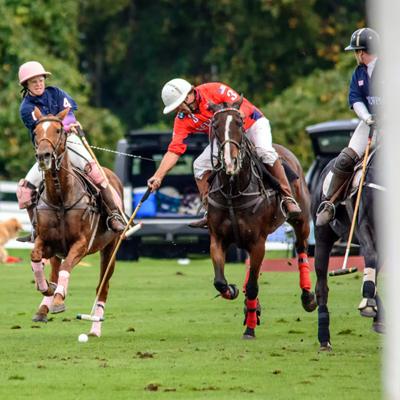 The showdown of the season took place on Saturday, Sept. 30th as the Newport Hotshots faced the Newport Masters in a youth vs. experience contest to conclude the 26th season of the NBC-10 Newport International Polo Series, presented by BMW.

Age before beauty, representing the Masters was Sam Clemens at #1, Alexander King at #2, president and team captain Dan Keating at #3, and Dave Bullis at back.

In the bloom of youth for the Hotshots was Charlie Bullis at #1, Brendan Tetrault at #2, team captain Sam Shore at #3, and Minnie Keating at #4.

Winning the first throw-in, Shore put one goal on the board for the Hotshots as the Masters were still limbering up.  The grace period was short lived when D. Keating unleashed a pair of goals, topped off by Clemens to end the chukker with the Masters leading 3-1.  C. Bullis opened the second chukker with an immediate offensive for the Hotshots, scoring an impressive three goals during regulation play and neatly converting a 30-yard penalty, complimented another goal from Shore.  The Masters took a slow and steady approach, scoring no goals in the second to end the chukker 6-3 for the Hotshots.  King upped the ante in the third chukker, leading with a goal for the Maters, but C. Bullis kept the streak alive, this time with one goal during regulation play, plus a straight and true 60-yard penalty conversion for a comfortable 8-4 lead at halftime.

A masterful comeback to start the second half championed by D. Bullis who handily converted 60-yard penalty, then a mid-field penalty and D. Keating making a goal during regulation play brought the Masters within one point of the Hotshots.  Then, D. Bullis tied the match at 8-all in the fifth while the Hotshots struggled to connect with the goal.  Down to the wire, D. Keating split the posts, putting the Masters back in the lead for the first time since the first chukker.  C. Bullis reignited the Hotshots with two goals to overtake the Masters 10-9.  Seconds remained as the Masters advanced to tie the game, narrowly missing the chance when the bell signaled the end of the match.

Following the match, the teams took to the podium for the Veuve Clicquot Champagne Toast and Trophy Presentation, where Dan Jaehnig, award-winning journalist and NBC-10 evening news anchor, presented the victorious Hotshots with the CMDR J.B. Leavitt Cup.