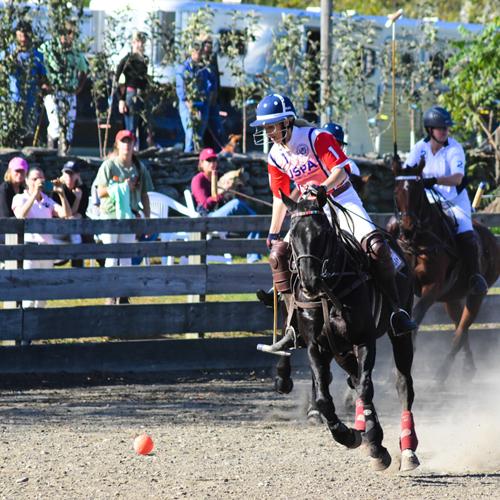 Newport Polo Club members and graduates of Newport Polo’s training program mounted up for the Players Tournament, an annual highlight of Newport Polo’s awards weekend.  Clear and sunny skies with unseasonably warm temperatures provided the backdrop for heated competition between the four teams.

Game One: In White, Carlos Silvera, Bridget Torrey, and Stefanie Boyer faced Meg Stowe, Lauren Bilsky, and Carol Gaudreau in Red to open the tournament.  White commenced with an early advantage, but Red countered to end the chukker trailing 3-1.  White made a lightning strike in the second, scoring 6 more points for a 9-1 lead at the half.  Play resumed with two quick goals by the White team, while Red gained a goal during regulation play, but several costly penalties ended the chukker with White leading 14-2.  Red continued to fight back, adding another goal in the final chukker, but White pulled out too big a lead, securing the team its place in the Final.

Game Two: Roger Souto, Minnie Keating, and Peter Jenkins in Green challenged Brian McCormick, Stephanie Still, and Julie DeAngelis in Black.  Team Green carried the opening to secure the first goal, plus a penalty conversion, but Black overtook 3-2.  The second chukker saw a defensive Green strategy, and small gains for Black, leading 5-2 at the half.  Re-energized after the break, Green came out swinging to score again quickly out of the lineup, but Black’s machine continued to grind a 10-4 lead.  In the final chukker, Black maintained dominance, scoring four more goals to Green’s one, securing a 14-5 win and its place in the Finals.

The tournament adjourned for the evening to carry the festivities onto the Clarke Cooke House and Newport Polo Club’s annual awards dinner where players, sponsors, and friends were honored for their contributions and achievements throughout the season.  Read More

Consolation:  With a night’s rest and fresh infusion of players, day two resumed as Hannah Stowe, Lauren Bilsky, and Carol Gaudreau in Red challenged Andy Janik, Minnie Keating, and Peter Jenkins in Green for the consolation round.  Scoring began with a penalty 1 automatic goal for Red, due to an infringement committed in front of goal, followed by a Red goal in regulation play.  Green got one in before the chukker’s end, down 2-1.  Green shifted the tide in the second chukker, owing to 3 goals during regulation play and two penalty conversions for a 6-2 lead.  Red narrowed the gap in the third with three goals to Green’s 1, trailing 5-7.  Only two goals apart, Red doubled down for two goals, but Green eked one out before the bell, claiming an 8-7 victory.

Final:  Triumphant in the first round, Carlos Silvera, Bridget Torrey, Stefanie Boyer, and Teghan Torrey in White confronted Brian McCormick, Laurel Howe, and Matt Janik in Black to take all in the championship round.  White got off to a shaky start with two fouls against them deftly converted to goals by Black.  Honor wasn’t lost though, as White earned four goals during regulation play to lead the match 4-2.  Black picked up momentum with a goal to start the second chukker until White continued to press the advantage, scoring two goals during regulation play and a converting a 15-yard penalty.  Black made its own 15-yard penalty conversion to end the first half down 4-7.  The pattern continued in the second half as Black opened the scoring, while White overtook 11-6 as the horn signaled the end of the third chukker.  Down by five goals, Black needed a hat-trick to take the tournament.  Three successive goals narrowed the gap, widened again by White 12-9.  As the seconds ticked down, Black won the final goal, narrowly missing the win, which went to White, 12-10.

There's no sport like polo. Be a part of it!  Newport Polo hosts the Newport International Polo Series XXVII, and is the home of America's first polo club, est. in 1876, and a founding member of the United States Polo Association offering public exhibition matches, polo club member services for grass & arena polo, and polo instruction year-round.