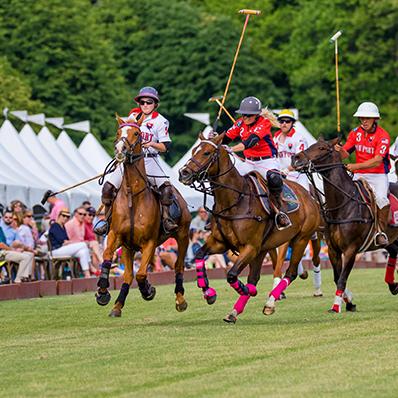 The Newport Masters mounted up and took on the Newport Hotshots to settle the age-old conflict of Experience vs. Youth at the Newport Cup on June 9th.

Representing the Newport Masters in red was Michel Nseir in the #1 position, with Heather Souto at #2, Dan Keating at #3, and Stephanie Still at #4.

Wearing white for the Newport Hotshots in the #1 position was Lauren Bilsky, with Jenna Davis at #2, Minnie Keating at #3, and Sam Shore at #4.

Due to the sixth chukka ending in a tie, the match went into overtime, and the teams began a sudden death seventh chukka tied at 7-7.  Although the overtime chukka was extremely competitive, the Newport Masters did not let the Newport Hotshots get away with what would have been their fourth- consecutive win over the experienced veterans.  Still scored a thrilling sudden death goal to give the Newport Masters an 8-7 victory in overtime.

During the match, a lucky lady from Portsmouth, Rhode Island won an official Team Jacket from the Pro Shop in the weekly door prize drawing.  An extravagant tailgate party in spaces 13 & 14, wowed the judges with beautiful decor, furniture, and food to celebrate a 40th birthday party.  The extensive measures they took to celebrate this occasion won them the Stella Artois Best Tailgate Prize Package.  Specialty vendors and concessionaires were present in the Hospitality village at the polo grounds, and included the Twisted Pony Cocktail Bar, Horseshoe Wine Bar, Newport Polo Pro Shop, Flint & Flame and gourmet food trucks.

After 7 chukkas, the match concluded with the Veuve Clicquot Champagne Toast & Trophy Presentation, as well as an autograph signing to meet the players.  The Newport Cup Trophy was presented by Steve Mould, Proprietor of Flint & Flame.

There's no sport like polo. Be a part of it!  Newport Polo hosts the Newport International Polo Series XXVII, and is the home of America's first polo club, est. in 1876, and a founding member of the United States Polo Association, offering public exhibition matches, polo club member services for grass & arena polo, and polo instruction year-round.