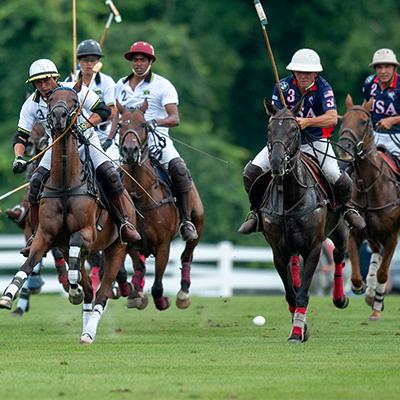 The Jamaican Polo Team was Jamin' to victory against USA on August 18th, 2018.  An early lead by the Jamaicans was nearly lost in the final chukker, until two decisive drives clinched the match.

Much like other polo playing nations, the sport was established by British army officers in Jamaica during the late 1800s.  The idyllic climate makes the island a perfect location for year-round high caliber play.  Polo has grown from its colonial roots to become a family affair, passed down through the generations.  Their skilled horsemanship and world-renowned hospitality has drawn noteworthy visiting players and is opening the sport to a new league of Jamaicans.  Each season, the Jamaican team brings one of their up-and-coming players in an effort to break USA's stronghold on the perpetual cup.

Playing for Jamaica were Conrad Chin at #1, Brandon Richards at #2, Shane Chin at #3, and Hamish Wates at #4.  USA fielded Michel Nseir in the #1 position, Minnie Keating at #2, Dan Keating at #3, and Jim DeAngelis at #4.

Jamaica's unfamiliar steeds loaned to the players by USA did not put a single hitch in the team's giddy-up.  The youngest player, C. Chin, came on strong to win the first goal, followed by his uncle and team captain, S. Chin, with a neat penalty conversion.  Jamaica continued the onslaught to double its score thanks to two goals from Wates.  Down by 4 goals, D. Keating, and DeAngelis rode hard to put USA on the board, halving Jamaica's lead 4 goals to 2.  A two-point stalemate set in as a goal by Richards for Jamaica was matched by DeAngelis, raising the score 5 - 3 for Jamaica.  Wates broke the stalemate in the final chukker, opening Jamaica's lead 6 goals to 3.  Then, M. Keating built-up moment for USA with two successive goals.  C. Chin wasn't satisfied with a one-goal lead, however, claiming the final goal and the match 7 - 5 for Jamaica.

During the match, a lucky winner returned to Boston with a magnum of Veuve Clicquot champagne in the weekly door prize drawing, and the Stella Artois Tailgate Prize went to an island oasis created in the Chalet tents. Specialty vendors and concessionaires in the Vendor & Hospitality villages around the polo grounds served up the grilled fare, chilled fare, seafare, jewelry, sunglasses, cutlery, wine sampling, polo team gear and more.

The match concluded with the Veuve Clicquot Champagne Toast & Trophy Presentation, as well as an autograph signing to meet the players.  The 1994 USA vs. Jamaica Trophy was presented by Peter Jenkins and Mary Marwick, who hosted the Jamaican team on its US tour.

Stay current with the 2018 team lineup, latest news, events and more by subscription to our eMagazine (sign up) and get match details from the Gameday Scorecard (sign up).  Both subscriptions are private and spam free.

There's no sport like polo. Be a part of it!  Newport Polo hosts the Newport International Polo Series 27, and is the home of America's first polo club, est. in 1876, offering public exhibition matches, polo club member services for grass & arena polo, and polo instruction year-round; founding member of the United States Polo Association,