The World Comes to Newport 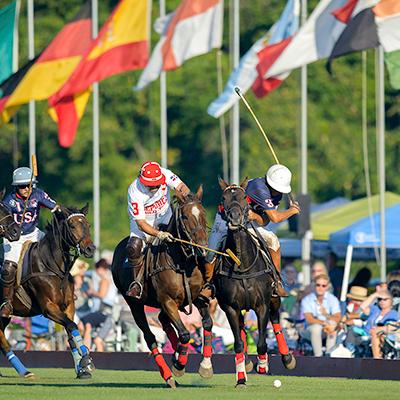 Chile will open the 28th season of the Newport International Polo Series to start 18 weeks of competition, camaraderie, and celebration.  South Africa will headline as guests of honor at the 19th annual International Polo Charity Ball, and the return of New Zealand will be a highlight in September, as these three powerhouses return to Newport from the farthest corners of the globe.  Polo fans are invited to join the players for welcome parties and Apres Polo events to fête the international visitors and regale in stories of their global competition.  Subscribe to our eMagazine for all the latest on upcoming events.  Read more to learn about the teams and the history of polo in each country.

Chile is renown in polo circles as a South American powerhouse and prolific international polo competitor on the world stage.  Its national team has won the Federation of International Polo World Championship twice and finished second in the most recent competition.  Five hundred players and fifteen polo clubs throughout the nation have made Chile an international polo destination for all level players to up their game.  This formidable rival will open the Polo Series on June 1, led by beloved team captain Felix Garrido who hails from Chile's capital of Santiago.  A season kickoff bash will take place on the eve of the match at the venerable Clarke Cooke House.  The Chilean Polo Team will be the guests of Official Team Lodging Sponsor, The Chanler at Cliffwalk.

Preparing for a rematch in June is the Scotland Polo Team for its 14th appearance in the Newport International Polo Series.  Despite its defeat last season, Scotland still leads 7 wins to 6 against USA and will have the chance to notch another victory on June 15th.  The Scotland Team will be the guests of Official Team Lodging Sponsor, The Vanderbilt.

"If you're lucky enough to be Irish, you're lucky enough."  Ireland returns to dance its annual jig against USA on July 6th.  By luck or by skill, the team has managed to come out ahead of USA more often than not in 27 contests, and win the favor of Newport's polo going crowd.  Expect one of the biggest turnouts in the season to see whether or not Ireland will hold on to the perpetual cup.  Erin go Bragh.

Italy broke the six season shutout in 2018, claiming the perpetual cup for the first time over USA.  The squad will be coming in hot off its peak tournament season and in top shape to defend the trophy.  The team hails from Rome, home of the largest and oldest of the 15 Italian polo clubs.  No matter the outcome on July 20th, everyone will feel a winner, standing on the trophy podium adorned with laurel crowns.

South Africa will eclipse the international roster this year as the guests of honor for the 19th annual International Polo Charity Ball on August 2nd and challenge USA for a third historic match on Saturday, August 3rd.  Polo in South Africa took hold in 1874 when the first recorded game was played between a South African and a British infantry unit in Cape Town.  The first club was established in 1884 by South African army officers and has grown to reach 38 clubs and 450 players strong today.  USA and South Africa have an even win-loss record, with USA the defending champion of the perpetual cup as of 2008.

Jamaica may be renowned for its warm inviting shores and relaxed lifestyle, but don't think that dulls their competitive edge.  Polo is played year-round in idyllic conditions, making the Jamaican Polo Team one of the most formidable of USA's annual challengers.  The team will be led by beloved captain Shane Chin, accompanied by top players and the nation's up and coming hopefuls.  Polo in Jamaica has evolved into a family affair as the sport is passed down to each new generation.  Famous Jamaican hospitality and renowned horsemanship draws players from around the world and is opening the sport up to a whole new league of island players.  Witness the 20th annual rematch on August 17th.  The Jamaican Team will be the guests of Official Team Lodging Sponsor, the Hotel Viking.

The USA squad has kept England in check in its most recent skirmish.  The annual Labour Day challenge has become a fan-favorite for the intense action between the world's polo superpowers.  It should come as no surprise that the teams are nearly neck-and-neck in their historic rivalry, with USA holding on to a narrow 9 wins to 8.  Team captain Garrie Renucci and his merry band of the London Polo Club are sure to go full monty to reclaim the silver on August 31 in the Labor Day classic.

2004 marked New Zealand's debut in the Newport International Polo Series, taking a narrow win, 10-9 over USA.  Polo in New Zealand was established in 1890 and is home to one of the world's oldest polo trophies.  The temperate climate and relatively high number of players creates a very competitive environment, and formidable teams to represent the nation in international competition.  The players will be traveling halfway around the world to take on USA, so don't expect them to leave without the silver on September 14th.  The team will be captained by renown legend, Roddy Wood, Prince Charles' lifelong polo pro.