Fun on the Sand at Beach Polo 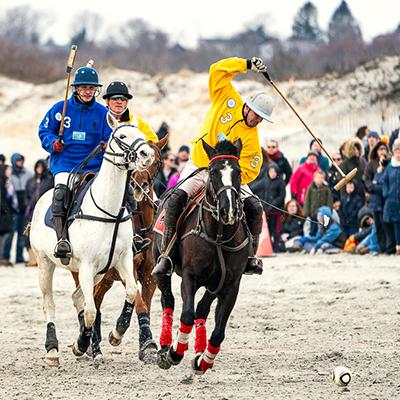 Eager fans lined the playing field carved out of Sachuest Beach to witness the first polo match of 2019 in Newport on February 23 & 24, 2019.  Warming temperatures and sunny skies brought out over a thousand spectators for the 8th annual Beach Polo exhibition on the final weekend of the 31st annual Newport Winter Festival.  Players from the Newport Polo Club made up the Islanders in Blue and the Mainlanders in Yellow for the fast-paced 4 chukker competition.

The Islanders, represented by Peter Jenkins at #1, Lauren Bilsky at #2, and team captain Sam Clemens challenged the Mainlanders, Roger Souto #1, Bob Barton and Mike Mangili splitting the #2 position, with team captain Hamish Wates.  A steady sea breeze and the sandy footing gave the players a run for their money as the ball was continually sent off course.  Despite the challenges, the Mainlanders edged out a 3-2 lead by half-time.  Clemens pushed the Islanders toward a comeback in the second half.  The young-gun, Wates, was out to prove himself, steering the Mainlanders to a narrow 5-3 victory.

Après Polo, players, and spectators gathered on the terrace at The Chanler at Cliff Walk for a celebratory toast around the fire-pit, with a gourmet hot chocolate bar, light refreshments, and other libations on offer.

Day 2, scheduled for February 24th was met with steady rains, denying the Islanders a chance to overturn the Mainlanders this year.

The 31st annual Newport Winter Festival took place from February 15th to the 24th.  Over 100 events throughout Newport County were featured in 'New England's Largest Winter Extravaganza,' combining food, festivities, music, and fun for all ages.

Newport Polo looks forward to participating again in the 2020 festival.