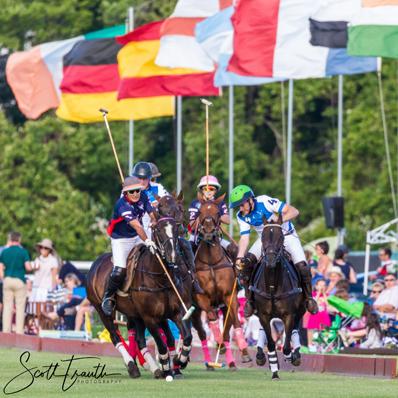 The Scottish and American flags waved vigorously in Saturday's unusual gusts, as bagpiper Christopher Curren lent serenity to the opening ceremony by escorting the teams onto the field in procession with a rendition of The Rowan Tree on the traditional highlands instrument, leading up to the Scottish and American national anthems to signal the start of the match.

Sporting Scotland's royal blue and white in the #1 position was Shehan Samaranayake, with Jamie Douglas Sr. at #2, James Douglas Jr. at #3, and Andrew Drummond - Moray at #4. USA fielded Michel Nseir at #1, Minnie Keating at #2, Rory Torrey at #3, and Peter Friedman at #4 wearing navy.

Scotland returned to the Newport International Polo Series with a vengeance. The past three times these teams played on this field team USA emerged victorious; the Scots were determined to end the USA's winning streak. The match brought Scotland to 8 wins over the USA's 6 wins in the rivalry which began in 2004.

The sidelines were crowded with waves of kilts and tartans, anxiously awaiting the match to begin. Team USA jumped into the match scoring the first goal made by Torrey which was almost immediately followed by a goal for Scotland by Samaranayake, but Torrey went back to work, producing 3 more points before Douglas Jr found his footing to add 2 goals for Scotland, with USA in the lead 4-3.  The second chukker saw a reversal of fortune as Scotland took control with each player scoring one point, to assert a 7-4 lead.  The third chukker began with another Scot goal by Douglas Jr. answered by a USA point by Torrey, but Drummond-Moray and Douglas Sr. scored to pad the lead for Scotland 10-5 at the conclusion of the first half.

The second half opened with another goal from Douglas Jr. and stagnant results from USA as their deficit climbed to 11-5. USA came back in the 5th period, scoring goals by Torrey on a penalty, followed by a field goal from Keating, reducing Scotland's lead to 11-7.  The 6th chukker brough more determination from USA with another penalty conversion by Torrey and goal by Keating, bringing the home team within 2 points with 2 minutes remaining, and rousing support from cheering fans but Scotland ramped up its defense against the American pressure and, as the clock wound down, one final goal by Drummond-Moray sealed their fate, with the final bell ending the match 12-9 for Scotland to bring home the glory.

The match concluded with the Veuve Clicquot Champagne Toast & Trophy Presentation, as well as an autograph signing to meet the players. The 2004 USA vs. Scotland Perpectual Trophy was presented by Ms. Allison Schumann, Guest Relations Manager of The Vanderbilt, the official lodging sponsor of the Scottish Polo Team. The best playing pony named by the Scottish team to whom it was lent was Jack, a fiery chestnut gelding who surpassed every other horse on the field.

During the match, a lucky lady from Shrewsbury, MA won two pairs of Bose Frames in the weekly door prize drawing and an automatic entry into the Turkish Airlines Grand Prize Drawing at the Finals to win a trip for 2 anywhere in the world!  Also during the match, the Stella Artois Tailgate Contest awarded a fabulous prize to a lively group of spectators

While in Newport, the Scotland players enjoyed many of the best attractions and highlights in the City by the Sea, including VIP ground transportation from Rockstar Limo, an aerial tour from Newport Helicopter Tours, Newport Mansion tours; Secret Garden Tours for behind the gates peak at the private gardens of Newport; a glorious afternoon sail; sightseeing via scoot coups courtesy of Scooter World; a charter fishing excursion with Sara Star Fishing Charters, tennis on the legendary grass courts of the International Tennis Hall of Fame; paddle boarding with Island Surf and Sport; a rooftop Tartan Shindig at the Vanderbilt team headquarters; a team dinner & dancing on the eve of the match at the one and only Clarke Cooke House, and all the great goings on in the City by the Sea.

"Polo is an international sport, played in over 80 countries around the globe, and we are honored to have teams traveling great distances to play in Newport," stated Dan Keating, captain of the USA squad. "A following of Scottish fans from throughout the region has grown each time the Scotts are on the schedule, wearing kilts and waving 'the Saltire' St. Andrews cross in lively support of their fellow countrymen."

Stay current with the 2019 team lineup, latest news, events and more by subscription to our eMagazine (sign up) and get match details from the Gameday Briefing (sign up).  Both subscriptions are private and spam free.

Minutes from downtown Newport, the International Polo Grounds are located at historic Glen Farm, 250 Linden Lane (off Rte. 138) in Portsmouth, RI. This bucolic setting is the last 100 acres of what was once a 700-acre manorial farm whose settlement dates back to the 1600's.  Its classical stone barns from the Gilded Age and its park-like grounds were rehabilitated by polo series founder, Dan Keating, and thrive today as an equestrian & community recreational property, and home of the Polo Series.

The Newport International Polo Series is proud to present its 2019 sponsors including Brahmin, Davitt Inc, Turkish Airlines, TD Bank, Boston Common, Gurney's, The Vanderbilt, Hotel Viking, The Chanler, Vanderbilt International Properties, Clarke Cooke House,  Stella Artois, Rockstar Limo, Atria Senior Living, Goslings, McGrath Clambakes and promotional partners that entertain our visiting teams including the International Tennis Hall of Fame, America's Cup Charters, Newport Helicopter Tours, The Cocktail Guru, Newport Mansions, Island Surf and Sport, and Scooter World. Special thanks to Schultz Marketing Partners, Van Liew Trust, Tanglewood, and WCRI, Classical Rhode Island. “Our sponsors have been with us since the beginning. Without their support, the Series would not be as extensive as it is,” explains Dan Keating, Polo Series founder.