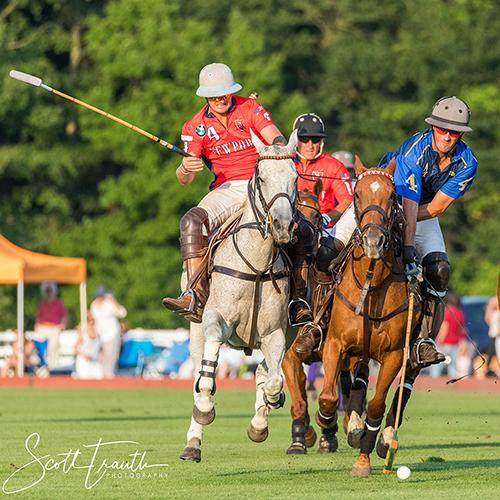 Palm Beach outlasted Newport 10-8 and tied the score of the rivalry, with 4 wins each since 2011 on Saturday, July 27th in the Newport International Polo Series XXVIII, Presented by Brahmin.

Palm Beach received a beautiful New England welcome, sunny skies, mild temps and a nice breeze for perfect polo weather. Sporting a navy blue for Palm Beach in Oliver Weiser and Michael Klein alternated in the #1 position with Jennifer Williams in the #2 position, Patrick Marinelli at #3, and Nick Snow at #4. Representing Newport in red in the #1 position was Roger Souto with Rory Torrey in the #2 position, Jenna Davis at #2, and Hamish Wates at #4.

After the introductions, the crowd stood at attention for the USA national anthem, then the ball was thrown in.  Palm Beach was trailing 4-3 in the historic win-loss record and was eager to even the score. Palm Beach got off to a rocky start though when a foul gave Wates the opening to convert a 60 yard penalty for the only goal of the chukker. Torrey quickly brought Newport's score to 2-0 on another penalty hit to start the 2nd chukker.  Finally, Snow put Palm Beach on the scoreboard with one point before the bell. The tides quickly turned during the 3rd when Newport made several costly mistakes that resulted in 2 penalty conversions, plus an automatic goal, raising the Palm Beach score, 3-2. Then, Snow and Williams pressed the advantage, scoring two more goals to end the first half 6-2 with Palm Beach leading.

Newport retaliated early into the second half with two goals from Torrey bringing the score to 6-4. Another goal from Wates in the 5th chukker was quickly followed by two from Palm Beach's Marinelli and Williams. Trailing 8-5, Torrey attempted to even the score with another goal, as did Wates bringing the closing 8-7 with Palm Beach still leading. Snow began the chukker with his 5th goal of the match, quickly followed by one from Williams. Newport tried to equalize, but could only manage one more goal from Torrey for a final score of 10-8 and Palm Beach victory.

The match concluded with the Veuve Clicquot Champagne Toast & Trophy Presentation, with commemorative prizes and the 2011 Newport vs. Palm Beach liberty bowl awarded by the Francesca Purcell and Shannon Pastuszak of Modern Luxury Boston, followed by an autograph signing to meet the players.

During the match, a lucky lady from Naperville, IL won a Duxbury Satchel from Brahmin in the weekly door prize drawing and an automatic entry into the Turkish Airlines Grand Prize Drawing at the Finals to win a trip for 2 anywhere in the world!  Also, during the match, the Stella Artois Tailgate Contest awarded a fabulous prize to a spectacularly decorated party of spectators.

Stay current with the 2019 team lineup, latest news, events and more by subscription to our eMagazine (sign up) and get match details from the Gameday Briefing (sign up).  Both subscriptions are private and spam free.

Minutes from downtown Newport, the International Polo Grounds are located at historic Glen Farm, 250 Linden Lane (off Rte. 138) in Portsmouth, RI. This bucolic setting is the last 100 acres of what was once a 700-acre manorial farm whose settlement dates back to the 1600's.  Its classical stone barns from the Gilded Age and its park-like grounds were rehabilitated by polo series founder, Dan Keating, and thrive today as an equestrian & community recreational property, and home of the Polo Series.

The Newport International Polo Series is proud to present its 2019 sponsors including Brahmin, Davitt Inc, Turkish Airlines, TD Bank, Boston Common, Gurney's, The Vanderbilt, Hotel Viking, The Chanler, Vanderbilt International Properties, Clarke Cooke House,  Stella Artois, Rockstar Limo, Atria Senior Living, Goslings, McGrath Clambakes and promotional partners that entertain our visiting teams including the International Tennis Hall of Fame, America's Cup Charters, Newport Helicopter Tours, The Cocktail Guru, Newport Mansions, Island Surf and Sport, and Scooter World. Special thanks to Schultz Marketing Partners, Van Liew Trust, Tanglewood, and WCRI, Classical Rhode Island. “Our sponsors have been with us since the beginning. Without their support, the Series would not be as extensive as it is,” explains Dan Keating, Polo Series founder.