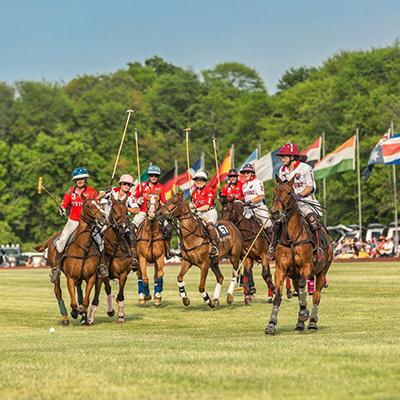 This year's Rotary Benefit Match was a battle of the sexes between the Newport Men and the Newport Women. It was a tight match ending in a 8-7 victory for the Newport men and lively fundraising for the Rotary Club of Newport, RI.

From the Newport Men in blue were Peter Jenkins/Luke Merrick #1, Roger Souto at #2, Sam Clemens at #3 and Peter Friedman in the #4 position. Meeting the challengers were Newport Women’s Jenny Elkus at #1, Margaeux Buchanan at #2, Minnie Keating at #3 and Lauren Bilsky at #4 in pink.

The Newport Women were quick to the draw in the opening period, with the first point of the day by Keating, which were followed shortly thereafter by two more by Keating and one by Rice.  Although the Newport Men sought earnestly to hold off attacks, the second and third chukka were again strong ones for the Newport Women. Rice scored during the second chukka and Bilsky scored during the third, keeping the newport Men shut out with a score of 0 - 6.

The Newport Women's stronghold seemed to be continuing into the fourth chukka as Bilsky scored again for the NPT Women.  Refusing to let the women do all the scoring, Merricks leveled out the long downward spiral by scoring the first point for the NPT Men. Led by the renewed hope from the goal of their teammate, the Newport Men proceeded to rally to score twice more during the fifth chukka (both by Clemens).

The sixth chukka was another explosive offensive, as attacks on goal were fired rapidly by both sides, with the Men successfully finding the uprights four more times, with two goals by Jenkins, and one each from Merrick and Clemens. The long standing lead of the Newport Women was suddenly nullified by 7 unanswered points to tie the score 7-7.

This thrilling match came to a head in Sudden Death overtime during which the Newport Men scored once last goal. There was amazing skill and effort shown fom both sides, but it was the Newport Men that took the victory in the end with a final score of 8 - 7.

Dating back more than 130 years in Newport, the polo matches are one of Newport’s grandest & most popular traditions, a living legacy from the Gilded Age, and open to the public.  The following Saturday will be Opening Day of the Newport International Polo Series, when audiences of several thousand spectators witness exciting polo action when USA/Newport takes on international rivals, as well as teams from major US cities playing against the home team every Sat, June thru Sept. at 5 PM / 4 PM in Sept.

Stay current with the 2019 team lineup, latest news, events and more through our e-Magazine, by subscription to our monthly Emagazine (sign up) and out Gameday Scorecard (sign up).  Both subscriptions are private and spam free.

Info about the Polo Series, our venue, concessions & amenities, and other information can be found on the About Newport Polo page.  RAIN DATE: If a regularly scheduled match is canceled prior to its start (due to weather/field conditions), the match will be postponed to the following Sunday at the same time.  All original polo match tickets & seating reservations will be transferred to the rain date.  For more details on our ticket policies, please follow this link.  In inclement weather, always check the Match Status recording on our Info Hotline (401) 846-0200 x2 and for Alerts published on our website, both of which are updated with any status change for the impending match.

There's no sport like polo. Be a part of it!  Newport Polo hosts the Newport International Polo Series 28, and is the home of America's first polo club, est. in 1876, offering public exhibition matches, polo club member services for grass & arena polo, and polo instruction year-round; founding member of the United States Polo Association,